Last year, the Department of Elementary and Secondary Education (DESE) revised its accountability and assistance system to consider additional metrics aside from standardized test scores. 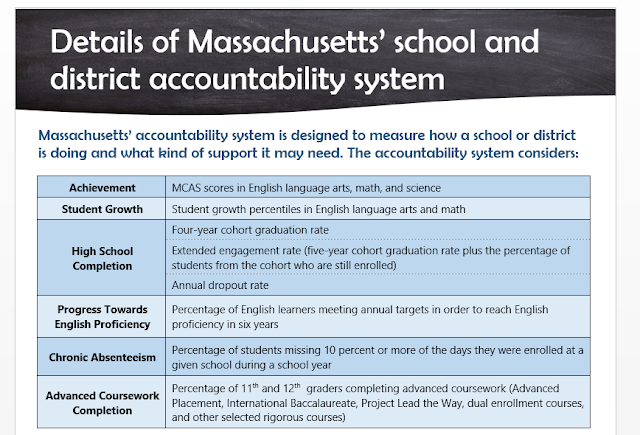 
As previously noted, schools are no longer classified in Levels 1 through 5 and are instead classified according to the categories below:

In 2018, Lynn as a district was classified as 'Not Requiring Assistance or Intervention' and the same was true in 2019. Further, the reason for this year's classification was 'Substantial Progress Towards Targets.' The percentage assigned to Lynn  in 2019 associated with this classification based on the 0 to 100 scale was 64%. When weighted along with last year's percentage, the cumulative target percentage was 56%. 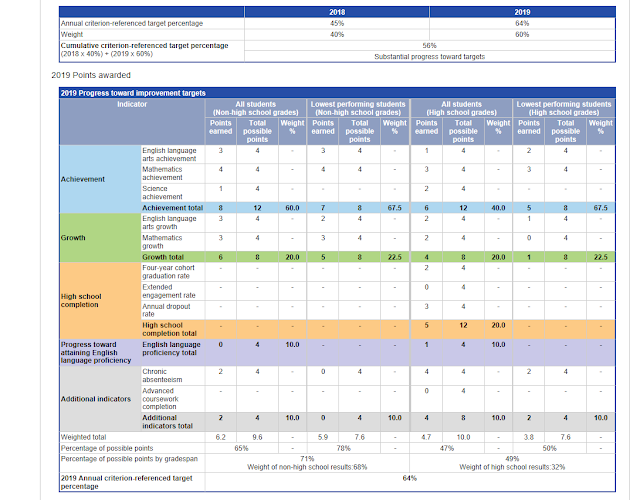 At the individual school level, three-quarters of the schools in Lynn were considered as either making 'substantial progress toward targets' or 'meeting or exceeding targets.' Three schools were classified as 'Requiring Assistance or Intervention:' Lynn Classical High School, Thurgood Marshall Middle School and Washington Elementary School.
at September 25, 2019 No comments:

You have previously run for Ward 5 City Councilor. What is motivating
you to run for City Council again in this year’s municipal election?

I’m running because I fear that If I don't speak up, my family and friends will no longer be able to live in the city we call home. The overwhelming majority of ward 5 is not being represented. Our councilors can ignore us because we do not vote, for them there is no incentive to reach out to us. I think that's wrong and dangerous, it's getting more expensive for renters and homeowners to get by, we need a councilor that is going to address our day to day struggles and do the work necessary to involve ALL OF US in what's happening in our city.

Thinking about your background and past experiences, what perspective
would you bring to the Lynn City Council, if elected?

During the day, I work as a caseworker for Congressman Seth Moulton. I would bring improved constituent services to Ward 5, I plan on creating a ward 5 team to help advocate for ALL OF US.  I also speak 3 languages and have been the only candidate in ward 5 to do outreach to all our immigrant communities. I also know how to engage the youth, we are the future of this city and it is time we had a seat at the table too.

Much of the focus on Lynn’s development has been on downtown, an area the Ward 5 Councilor represents. In what ways do you think the city has been successful in its efforts in regard to downtown Lynn? What do you think could be better, either in terms of planning or action?

The city in my opinion has not been successful in that regard. First, we are the largest city in the North Shore and we do not have a planning department or a city planner. Second, we hand out tax breaks with nothing in return for the city. We need to be leveraging our proximity to Boston to the benefit of the people already living here.

Our development strategies are impulsive and short sighted. Look at the vault building downtown; there are 27 vacancies in the building!  We need to be more strategic about how and where we build, and we need to be giving residents a say as to what they want to see built in Lynn.

We need to find a way to revitalize Lynn without displacing the people already living here. We do not want what happened to Cambridge and Somerville to happen to us. 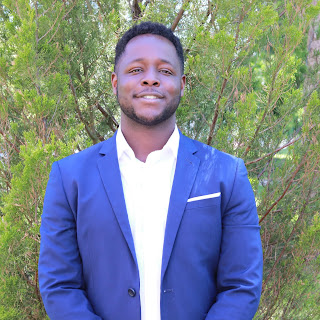 In the last city election without a mayoral race (2015), voter turnout in Lynn was approximately 22%. Do you think believe there to be a general apathy or disinterest in the city’s government? More specifically, how would assess the city’s inclusion of voices or perspectives of younger Lynners (those aged 29 or younger) in the decision-making and planning process?

Sadly, I think there will be more apathy, a lot of Lynners are completely done with politics, and they’ve been burned too much by false promises. Funny enough a lot folks mention things like the city is run by the mafia and that I am wasting my time trying to get in. I will not give up though, I really believe more and more people are waking up, so I will remain hopeful.

As far as the youth in the city are concerned, we are always told to get in line and wait our turn. Our voices are not really valued, however I think the responsibility falls on us to get organized and vote, if we don't then we can't complain.

If you could spearhead one major project or initiative in Lynn, what would it be and why?

The creation of ward teams for every ward, when you call most elected officials they have staff to help take calls and do outreach. City council should be no different, we have a lot of seniors with experience and great ideas, we also have a lot of youth looking for experience and the energy to do outreach. We could easily fund staff made up of youth and seniors to get everyone more involved in the process. It would be a total game changer for our city.

Finally, why should Ward 5 residents vote for you in this fall’s election?

You should vote for me because I have been the only candidate to knock every part of ward 5. I have the experience and the energy to make sure ALL OF US no matter where we live, will have a seat at the table. When I become councilor, you become councilor too.