On this day, 10 years ago, I published my first post. To be quite honest, I'm not sure why I specifically started this blog in April 2011 but I do remember becoming more interested in education and educational justice as I reflected on my time at Wellesley College and as a Lynn public school graduate. Namely, I considered the ways in which divestment, the overemphasis on standardized testing and an opportunity gap factored into my experience at an elite, predominantly white liberal arts college (located in Wellesley, MA).

So in that contemplation, An Education was born.

Since that time I have had the opportunity to interact with so many wonderful individuals, some I only know through Twitter and others I have been fortunate enough to meet in real life (shout out to Tracy Novick and Jennifer Berkshire for being early supporters of my blog and also providing much needed guidance at times). I have worked with Lynn Parents Organizing for a Better Education. Moderated a few Lynn School Committee debates. Grilled local and municipal candidates for office. Given presentations on the Massachusetts public school funding formula (my favorite topic). Hosted a book club with the authors of A Wolf at the Schoolhouse Door. Gotten a book signed by Diane Ravitch.

While life circumstances have gotten in the way in last few years and I have not been able to blog as much as I would like lately - I'm still celebrating ::shrugs::

To celebrate the last decade, here are some of my favorite posts:

Email ThisBlogThis!Share to TwitterShare to FacebookShare to Pinterest
Labels: Celebration

Recently, discussion around the growing Limited English Proficiency/English Language Learner student population in Lynn at the kindergarten level. Last week, the Lynn School Committee voted 4-3 to not require kindergarten teachers to obtain an ESL certification (that decision received a sharp rebuke from the Daily Item). 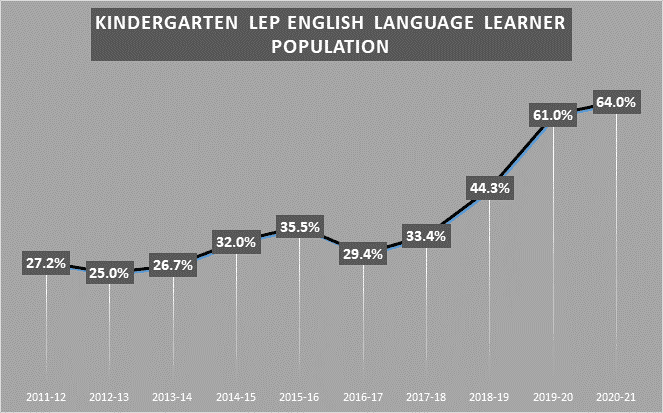 As the student population in Lynn continues to change, it will be interesting to see how the School Department responds to changing priorities and needs as a result (and also how the School Committee responds).

Yesterday, I had the opportunity to attend a Policy for Progress webinar titled 'A Conversation for Progress: Perspectives on School Segregation' which featured panelists discussing the segregation in Massachusetts public schools. In large part, the conversation centered on this Fault Lines report on attitudes and perceptions of segregation in the state. Interestingly, according to the report, Massachusetts voters perceived school segregation to be a bigger problem nationwide compared to the state (26% versus 14%). Additionally, nearly half of Massachusetts voters believe that the state's school's have become less segregated in the last 50 years.

The report goes on to compare the disparities in five neighboring communities including Worcester-Shrewsbury and Lawrence-Andover. In looking at the city of Lynn and some surrounding communities, one can similar disparities as those noted in the Fault Lines report.

Per the most updated data reported by the Department of Elementary and Secondary Education (DESE), the percentage of non-white students (including multi-racial students) in Lynn this school year was 86.9% compared to a range of 13.6% - 57.4% in neighboring communities. Just over two-thirds of the student population in Lynn is Hispanic. 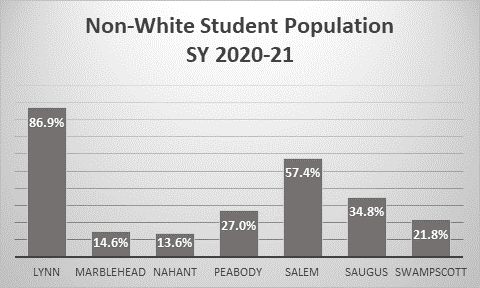 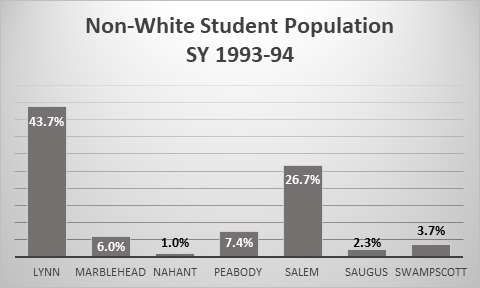 In looking at other selected populations, Lynn also has a much higher percentage of students whose first language is not English and who are English Language Learners and 'economically disadvantaged'. 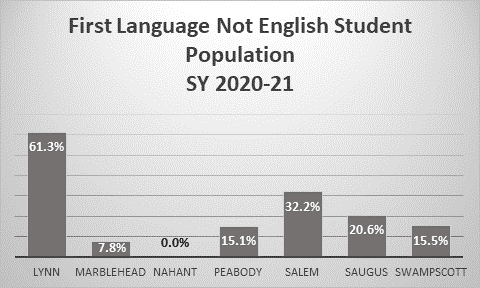 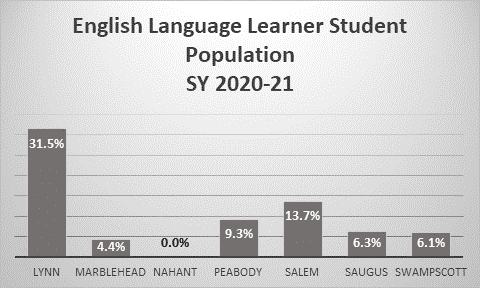 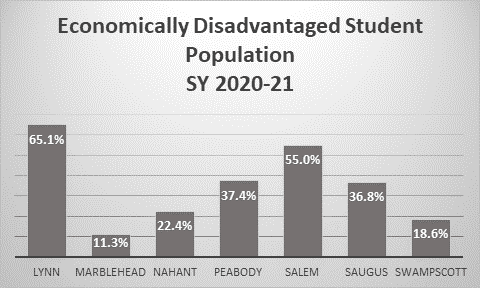 Book Reviews: A Wolf at the Schoolhouse Door

During the last four years, there have been many issues and concerns that have competed for the public’s attention: the Muslim ban, family separations, an impeachment, the ongoing coronavirus pandemic, protests against police brutality and the recent election to name a few. Noted but perhaps less at the media forefront has been the implementation of specific policies both under Secretary of Education Betsy DeVos and within individual states that aim to "re-envision" public education through a very conservative lens. In terms of public education, many of the conversations in recent years have focused on the school choice movement and the increasing use of standardized test scores to hold schools “accountable” and label them “good or bad.” The re-envisioning (or dismantling depending on your vantage point), however, which has really solidified in the last few years is unfortunately much broader than that.

In A Wolf at the Schoolhouse Door: The Dismantling of Public Education and the Future of the School, authors Jennifer Berkshire and Jack Schneider (hosts of the popular podcast Have You Heard) go beyond talking about the conservative agenda and public education solely in terms of privatization and standardized testing.  A Wolf explores other aspects of this agenda: vouchers, the rise of (pre-COVID) virtual schooling, the idea of “unbundling education," deregulation, limiting the role of organized labor, the use of ratings and advertising in public schools, and, at the heart of it all,  free market thinking. More than just positioning efforts to dismantle public education as only a conservative, Republican ideology, Berkshire and Schneider also acknowledge the ways in which Democratic lawmakers have also contributed to a climate in which some not only see education and the way it is currently delivered  as something that needs to radically change but also an sector to profit off of at times to the detriment of the most vulnerable student populations. 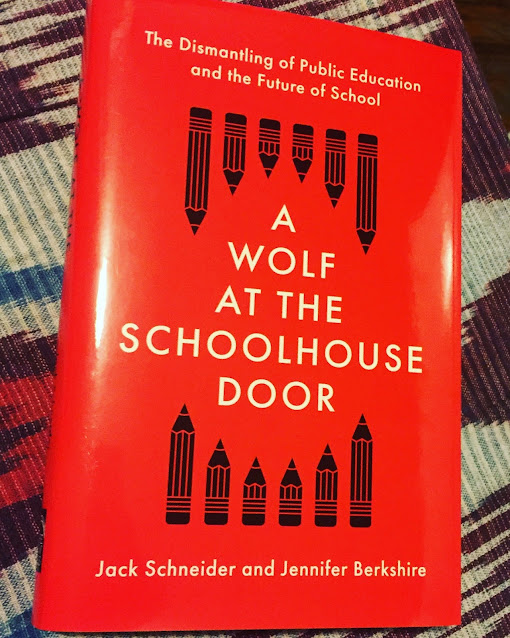 Both in laying out the current state of public education and providing  key historical context, Berkshire and Schneider provide an extensive yet well laid out and easily understandable assessment of the issues at play in light of the substantial funding  and efforts being allocated toward a very specific re-envisioning of public schooling that relies less on the idea of public education as a public good meant to benefit the collective  and more so on individual needs that prioritize  choice, competition and cost cutting. A Wolf at the Schoolhouse Door is a must read for anyone interested in the current state and future of public education in the United States.

If purchasing, please consider buying from your local independent bookseller.

The Department of Elementary and Secondary Education recently released updated public school enrollment figures for the 2020-21 school year. Amidst the pandemic and many districts moving to completely remote learning, the state reported a 4% decrease in student enrollment this year when compared to last year. 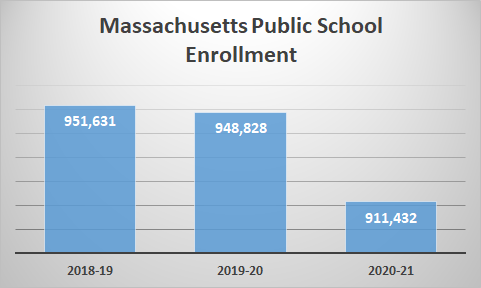 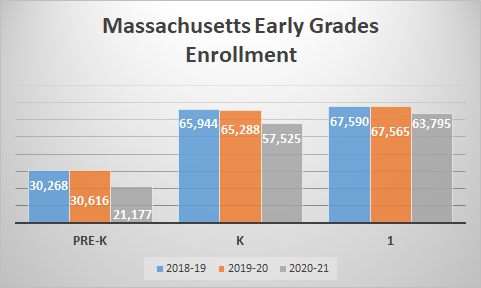 Similar to the Commonwealth as a whole, the Lynn Public School District saw a similar decrease at 3% compared to last school year. 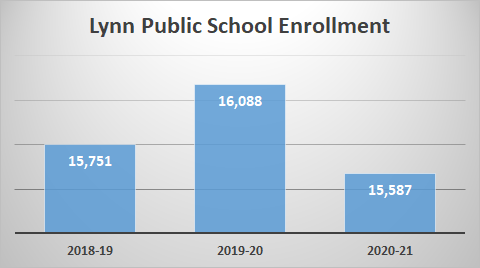 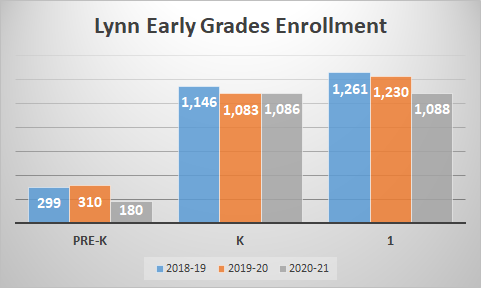 Taking a look at the selected student populations at the state level, Massachusetts reported higher percentages of High Needs and Economically Disadvantaged students this year.

In addition to concerns around online learning and whether, when and how to reopen school buildings, changes in student populations, particularly in districts like Lynn, as it relates to the number of students but also the types of students the district is tasked with education given current circumstances is should be given consideration.

Early voting in the 2020 election will begin in Lynn on Saturday, October 17th at 8am and end on Friday, October 30th at 12:30pm. During the week, early voting hours will match normal City Hall business hours and on weekends (Saturday and Sunday) voting will take place between 8am and 2pm. 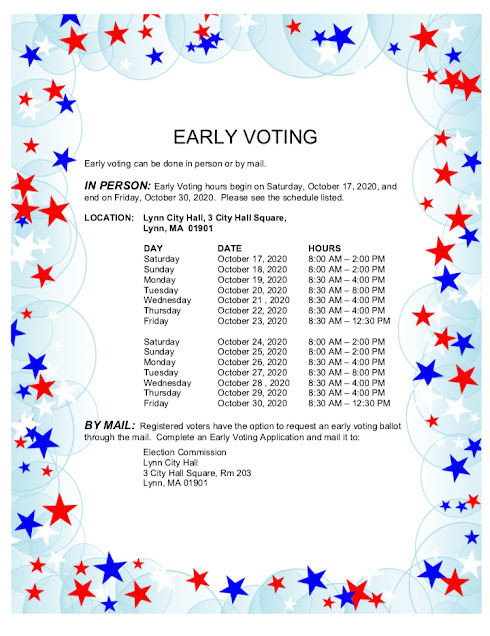