The city overall overwhelming voted for incumbents Senator Elizabeth Warren (67% to 30%) and Governor Charlie Baker (61% to 39%). Lynners also voted on the ballot questions in line with the final statewide results (No; Yes; Yes).

While the official voter participation rate statewide has not been posted yet, Secretary of State William Galvin did expect 2.4 million ballots to be cast in Massachusetts (equivalent to a more than 50% turnout rate).

Given the recent political events and current climate, there has been a renewed push for voter participation in this year's midterm election. Here we take a look a Lynn's voter turnout rates for the past decade. 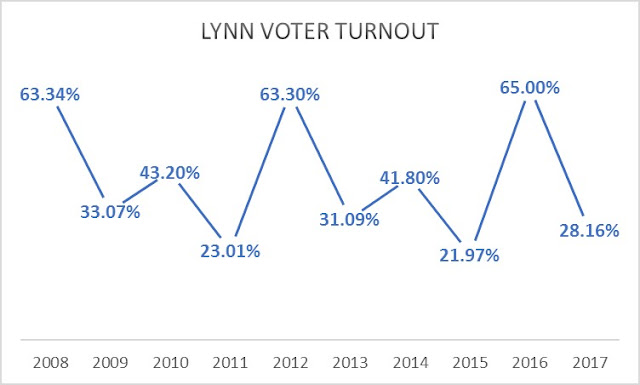 As previously noted, voter participation in Lynn tends to be highest for presidential election years and lowest in years where there is a municipal election but no mayoral contest.

Lynn Rolls Out New Attendance Initiative - A Look at the Data

In the October 1st edition of the Daily Item, Gayla Cawley reported that the Lynn Public School District is rolling out a new K - 12 attendance plan called "Every Student, Every Day." Part of this plan includes "studying data to determine which students have high absentee rates and working with those families, and reaching out to community partners for support."

Attendance rates did vary by school. Drewicz and Aborn, for example, each reported their average number of absences to be about 6 while Fecteau-Leary reported 29 absences as the average.


As previously reported, Massachusetts's new accountability system takes into consideration a number of factors, one being chronic absenteeism. At the non-high school level, Lynn received 3 points for all students, meaning it met its target; Lynn's 2018 target for chronic absenteeism in the lower grades was 11.7%. The target for the lowest performing students was 11.9% and Lynn reported 13.1% so while it did improve from 2017, it was below the target and the district received 2 points as a result.

The chronic absenteeism rate at the high school level increased from 2017 to 2018 for students overall as well as for the lowest performing students. Due to this decline, the district received 0 points in each category.

In addition to working with families directly, the Item also noted that the district "is doing community outreach and awareness and educating community agencies and doctors’ offices about the impact of chronic absenteeism."

As of this school year, Massachusetts has introduced a revised accountability and assistance system and will no longer be categorizing schools into Levels 1 through 5. Instead, schools will classified as follows:

Schools without Required Assistance or Intervention (85% of Schools):

Reasons for this classification include:

Reasons for this classification include schools/districts requiring either:
or

More specifically, the new accountability takes into account indicators not previously factored into the accountability system including chronic absenteeism and advanced coursework completion and will also have an increased focus on "raising the performance of the school's lowest performing students." In addition to the overall classifications referenced above, schools and districts will also be assigned a percentage that combines information about the chosen indicators into a single number between 0 and 100. In order to be classified as "meeting targets" a school or district must have target percentage of 75% or higher. 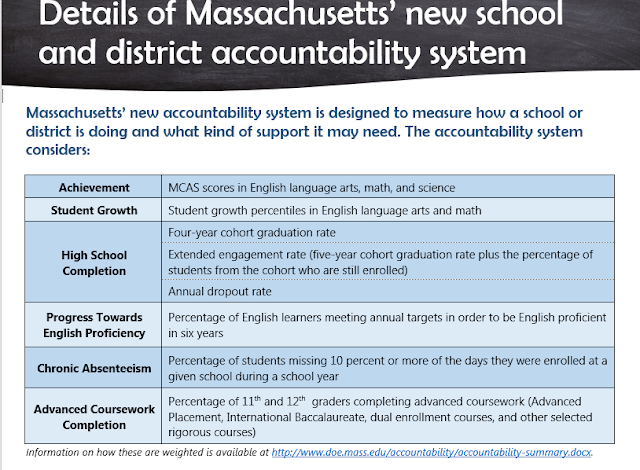 In order to get a better sense of this new accountability system, let's take a look at the Lynn Public School District. In 2018, Lynn's overall classification was 'not requiring assistance or intervention' with the reason being 'partially meeting targets.' The percentage assigned to Lynn associated with this partial meeting of goals based on the 0 to 100 scale was 45%. 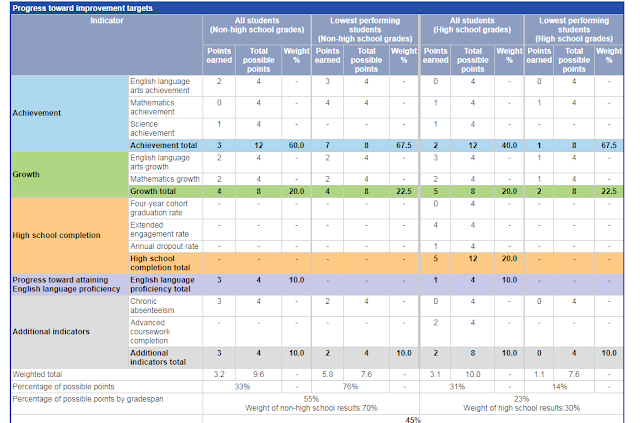 As you can see, each of the indicators is given a point total from 0 to 4 based on the reported data compared to their state determined target. Though there is some variation in the 0 to 2 point range depending on the category, schools that receive a 3 were considered 'on target' and those that received a 4 exceeded their target. Further, each category is weighted differently. For example, 'Achievement' at the non-high school grade level for all students is weighted at 60% while it is weighted 40% for all students at the high school level due to the additional secondary indicators (high school completion). Overall, Lynn's non-high school results were weighted at 70% while the high school results were weighted as 30%.

For Lynn's 2018 MCAS scores, see here and the district's drop out rates, here.

Most schools within LPS were also classified as 'not requiring assistance or intervention' with the exception of Classical High School, Fecteau-Leary, and Pickering Middle School. 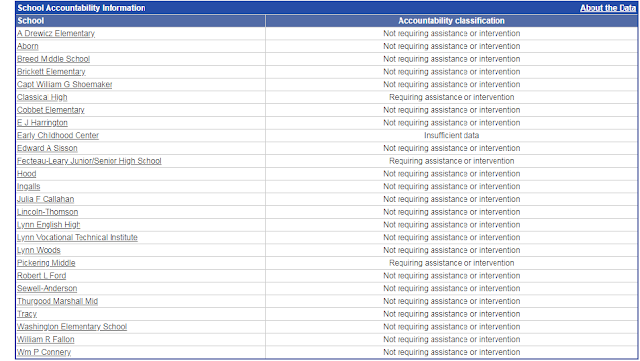 Classical was classified as such because:
Fecteau-Leary required assistance due to its low participation rate among the student body at large and Pickering reported low subgroup performance among Asian students. In terms of meeting targets, Drewicz, Brickett, Callahan, Cobbet, Ford and Lynn Tech were all reported as 'meeting targets.'

KIPP Academy Lynn, a single school district, was also classified as 'partially meeting targets' with a target percentage of 29%. 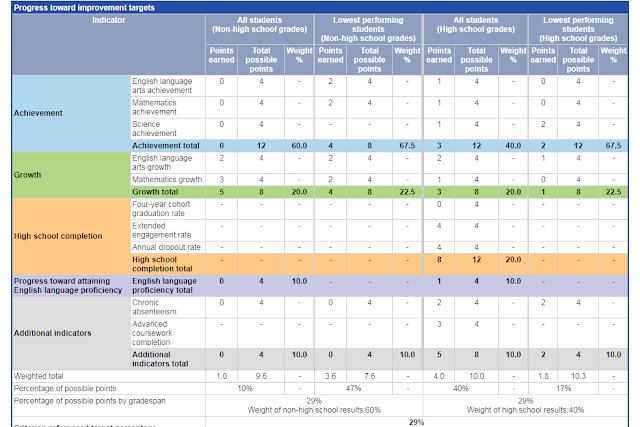 With the election of former State Representative Brendan Crighton to the Massachusetts State Senate this spring, several candidates have announced their candidacy for the 11th Essex State Rep. seat. Democrat Drew Russo is one candidate running for the seat vacated by Crighton. Currently, the Executive Director of the Lynn Museum/LynnArts organization, Russo previously worked for former U.S. Representative John Tierney as well as in advancement for St. Mary's High School (Lynn). Here he answers some questions regarding his candidacy for State Representative.

Tell us a little about yourself and why you are running for 11th Essex State Representative.

First off, thank you for the opportunity to share my views with your readers, Cleo!

My name is Drew Russo.  I grew up in Lynn. Having become increasingly active in civic life as an adult, I bring a passion for public service.

If elected, I will work for social and economic justice, whether it is advocating for a $15 minimum wage, working to enact policies that reduce income inequality, and ensuring that all of our citizens have access to a quality public education, the right to organize for their rights as workers, safe and secure neighborhoods, housing that allows them to live with dignity in the community of their choice, the freedom to live without fear regardless of race, gender, sexual orientation, or immigration status, and a compassionate, proactive approach to the opioid epidemic that prioritizes treatment and recovery.

You previously worked in Congressman John Tierney's office. In what ways do you think that experience would be beneficial should you be elected State Rep? What are some of your other key qualifications?

As Congressman Tierney's District Outreach Director, I partnered with community members, business leaders, educators, and elected officials throughout Lynn, Nahant, and the other thirty-seven cities and towns of the Sixth Congressional District.  The experience taught me that every community is unique and often brings a different set of priorities to the table. It will be important for the next Representative to work hard on a variety of issues affecting Lynn and Nahant, whether it is advocating for Nahanters who oppose the current expansion plans for Northeastern University at East Point or fighting to ensure that Lynn receives the maximum amount of state funding for our schools.

My past experience also includes leading the Lynn Museum/LynnArts, one of the city's foremost arts and culture institutions, years of political activism including service as Vice Chair of the Lynn Democratic City Committee, and national service with the Jesuit Volunteer Corps.

Specifically in terms of public education, in what ways will you advocate for improved educational opportunities for students and families in the 11th Essex District? Further, what is your view on charter schools?

Investing in our public schools needs to be one of our highest priorities.

Through my work at the Museum, I have had a unique opportunity to observe students and teachers who visit us as part of an ongoing collaboration that brings hundreds of Lynn Public Schools third grade students through our doors. With every new year, I am more and more impressed by the quality, intellectual curiosity, and depth of learning in our third grade classrooms.

I am encouraged by current legislation that would implement the recommendations of the Massachusetts Foundation Budget Review Commission.  I am in favor of increased state funding for districts with vocational education programs (like Lynn Tech), and increased state funding for districts with high numbers of special needs students and English language learners.

This is the primary reason that I am advocating for the passage of the Fair Share Amendment that would tax incomes (not assets) over $1 million and reinvest those funds into our public education system, as well as improve our transportation infrastructure.

For similar reasons, I oppose additional charter school expansion.  I do not believe that funding should be diverted from public schools to charter schools. That's why I voted against, and publicly supported the campaign opposing, Question 2 which would have lifted the cap on charter schools in 2016.

While we need to find meaningful to assess educational performance, we need to also be careful not to over-test our students or force our educators to teach only to the test.  Building the entire learning experience around one series of tests can defeat the purpose of creating a holistic educational environment. Measuring achievement should not come at the expense of a well-rounded education. Additionally, with so many other variables at play, standardized test scores should not be the only measure of teacher or school performance.

Why do you want voters in the 11th Essex District to know about you?

I love our communities and would be honored by the opportunity to serve. That includes returning your phone calls, letting you know where I stand, and always respecting your opinion even if it differs from my own.

Also, I am pretty decent at Karaoke, love baseball though I could never play it, and freely admit that a jar of peanut butter does not last very long when I am around.

Thank you for the opportunity to answer these questions! I hope to earn your vote in the Democratic primary on Tuesday, September 4th.

[Editor's Note]: With multiple candidates running as Democrats for the 11th Essex State Rep seat, there will be meaningful primary held on Tuesday, September 4, 2018. The General Election will be held on Tuesday, November 6, 2018.
at June 01, 2018 3 comments: